One of Taylor’s primary concerns is the impact of the financial crisis on colleges and universities.   He points out that higher education endowments, even those of the most prestige institutions like Harvard and Yale, suffered serious losses during the financial crash and have led to sobering consequences; some measures have included slashing operating budgets, eliminating entire programs, and freezing faculty hiring.  To counter the deep budget cuts universities face, Taylor suggests increased partnerships with the government, non-profit groups and, controversially, for-profit groups.  This involvement serves both to solve the financial crisis and also to integrate higher education more firmly in the fabric of American life and to become a dynamic force that generates community improvement.

Taylor is also very interested in new technologies that encourage networking between students and also between students and teachers.  His experience as an educator has convinced him of the value of using technology both inside and outside the classroom.  For example, Taylor believes that theses and dissertations should not be strictly defined as written manuscripts.  Instead, students should be encouraged to use versatile new technologies that combine multimedia in innovative ways.  Because more content is presented online in just such a format, Taylor argues that gaining an aptitude in expressing valuable information through non-traditional media is important.

In sum, Taylor does not believe higher education can continue to exist in the form it does today.  In order to solve the daunting financial crisis almost every institution faces, new and original strategies are called for.  Whether by partnering with corporations or by rethinking the structure of graduate programs, the solution will require breaking the traditional mold.  Additionally, he believes that colleges and universities should be rushing to embrace increasing globalization and network technologies like the Internet to expand opportunities available to students

My personal reaction towards Taylor’s ideas is favorable.  My generation is in the unique position to witness the schools we attended (elementary, middle, high school, and college) undergo the transformation to technology-based curriculum.  One prominent observation of my own is that while everyone essentially agrees that the technology upgrades are essential, the processes themselves are slow, uneven, and expensive.  I was lucky enough to go to a high school that was at the cutting edge of network technology and had new computers and equipment.  However, only a few short years later those computers began to be out of date, and less than ten years later they are obsolete.  It can also be difficult to make the best future-looking investment in both hardware and software, not knowing which will continue to be supported and relevant.

Whatever the choice of technology, it will need to be continually upgraded, and that process is expensive.  I’m not sure if Taylor’s financial concerns are compatible with radical further technological investments, at least at this stage of the world’s economy.  However, I think it’s also easy to recognize that if schools do not make the investment in restructuring their information technology systems and become an active part of globalization, they are in trouble.   Taylor has done an admirable job making that observation and starting a dialogue. 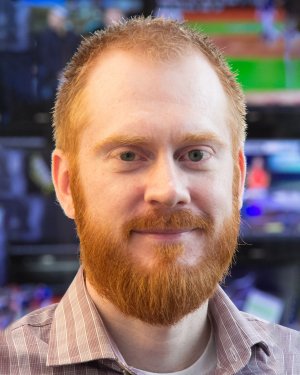 My research interests focus on the conversations surrounding the proper functioning of the press in a democratic society that took place during the Progressive Era, with special emphasis on religious media. I also continue to study the evolving use of content marketing by advertisers with particular focus on “long-form” multimedia (i.e. videos on Youtube).